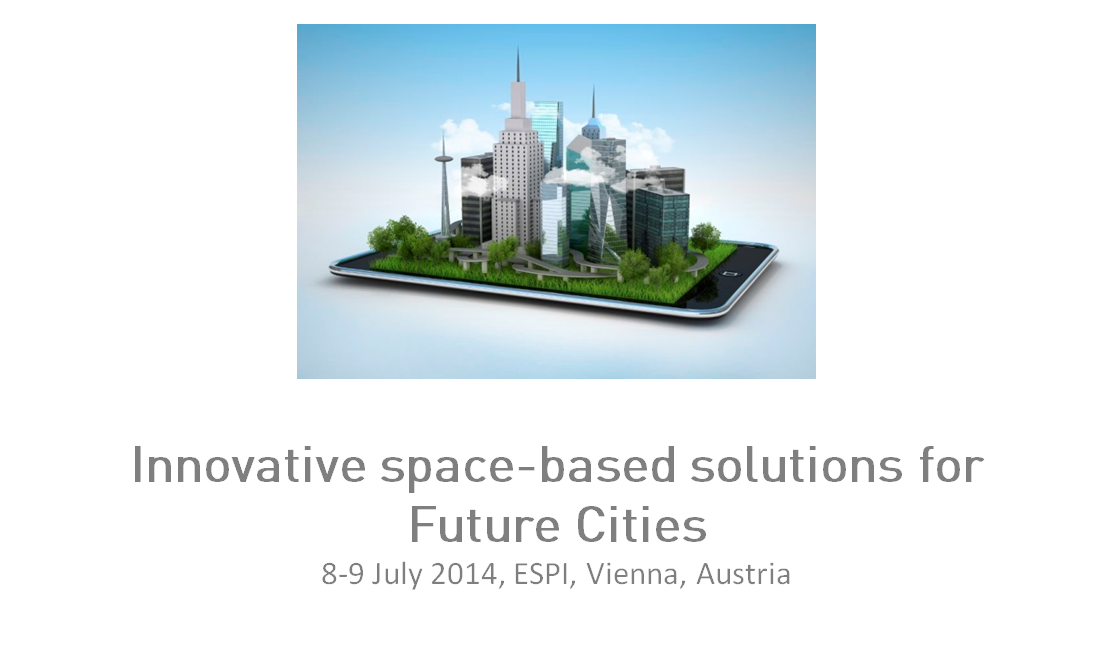 You Are Here: Home // Events // Innovative space-based solutions for Future Cities // About

9 July 2014. ESPI, in its capacity as IAP Ambassador Platform for the Central and Eastern European region, jointly organised a workshop entitled “Innovative space-based solutions for Future Cities”, at its premises in Vienna

Today’s society has to face a lot of challenges. Amongst these is the need for sustainable urban development, which is driving the evolution of “Smart Cities”. A “Smart City” is a city of the future using intelligent and innovative solutions and managing resources responsibly and sustainably. To face the challenges of the 21st century intelligent technologies are needed. Requests for more effective and innovative solutions, products and services are increasing. Not all of them can be met with the methods and tools currently in place.

It is to be expected that the large increase in the world’s population during the next 35 years will create a resultant increase of population in major cities. More and more megacities will evolve. In the course of this development, challenges and requirements for a life within these megacities will be in a state of flux. Inhabitants will seek social progress and will need to be transported and supplied with food, water, energy and electricity. There will be a growing demand for security, communications, health care as well as waste management. At the same time topics like climate change, CO2 emissions, renewable energies, sustainability and air monitoring will become ever more important. Moreover, these issues are directly connected with each other, making the overall city system more complex.

The workshop aimed at presenting how the development of Future Cities can be supported by space technologies, in which ways the challenges of Future Cities are linked to space applications and how the IAP programme of ESA intends to support and contribute to the development of services to help meet these challenges. The event provided a platform for discussing new solutions that can be initiated, with participants from different sectors like city planners, public transport managers and energy providers. Furthermore, it provided a good possibility to identify partners for joint projects.

Audience at the workshop

On the first day, ESPI’s Resident Fellow Erich Klock together with Thomas Geist, from the Aeronautics and Space Agency of the Austrian Research Promotion Agency (FFG), welcomed the participants to the workshop. Key note addresses were given by Volker Schaffler (TINA VIENNA Urban Technologies & Strategies), who gave an overview on trends and challenges of Smart Cities and provided an insight on the Smart City Vienna strategy, and Michael Schramm (IBM Austria), who talked about visions on Future Cities. Johannes Bockstefl (FFG) and Tanja Tötzer (Austrian Institute of Technology) provided an overview on national and European initiatives and activities in the area of Smart Cities. The following case study presentations aimed at demonstrating the use of space applications to develop innovative solutions for Future Cities.

In the afternoon session of the first workshop day, Rob Postema (ESA) gave an overview on the ESA IAP programme as well as an introduction to the upcoming ESA ITT on Future Cities (http://artes-apps.esa.int/opportunities/intended-tender/future-cities). Furthermore, Anke Freimuth (DLR) provided an insight on the role of national delegates to ESA, which was followed by a presentation from Erich Klock (ESPI) on the role of IAP Ambassadors. The subsequent interactive session, which was moderated by Birgit Baumann (BusinessMind), aimed at identifying needs and challenges of Future Cities as well as at discussing potential space-based solutions to satisfy the needs and overcome the challenges. This session provided also an excellent opportunity for networking and was highly appreciated by the participants.

Interactive session of the workshop

Interactive session of the workshop

Feedback from the participants on the interactive session

The second workshop day started with a speed networking session, in which the participants had the opportunity to get to know each other and to identify potential synergies and cooperation. In the subsequent presentation on how to write a proposal, Rob Postema (ESA) summarised and explained in detail key points of a proposal for IAP Feasibility Studies. This was particularly interesting and helpful for non-space companies that participated in the workshop.

A workshop organised by